Finally.....proof so you’ll believe me when I say there's still snow in the B.C. of Gaspésie….lol….Funny how it had to come from a picture from the space station…. 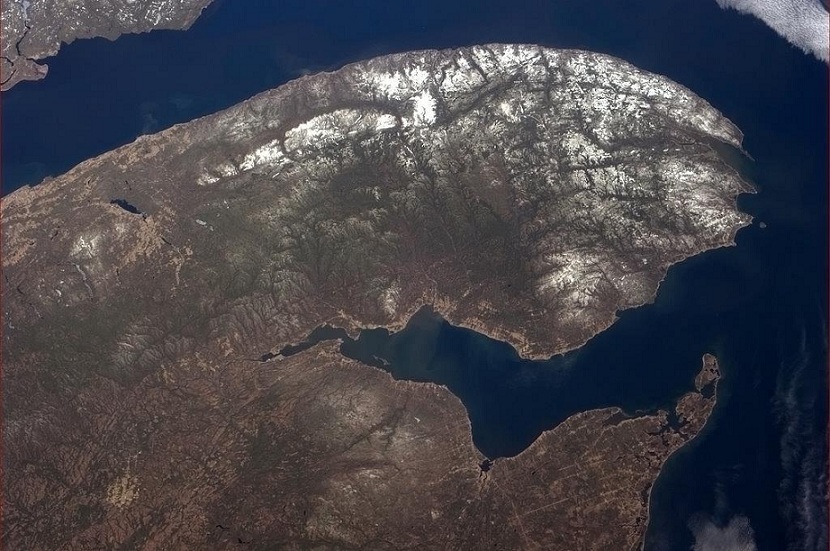 Thanks to our own ISS commander, Chris Hadfield’s picture, you can now see I'm not exaggerating! (PS Welcome home Chris!)

All my reports are the real conditions.

We even have a Rideability Policy for when snow conditions are not ‘optimum’. If I think that you won’t have ‘good’ sledding because of the conditions, we’ll let you know 2 days before your arrival.

Hey, I want to have a good ride too! You can then cancel without a penalty or re-book for a later date. You can still come if you want, but that's your decision.… We want you to come to the Sled Den and have a good time….. a true adventure…..to see what Gaspésie is all about.

The more I know about your riding style, skill level & the type of riding you expect, the better I can gauge the necessary conditions..…it’s quite a ways to come and not be able to ride and sled the way you want…..otherwise, you would stay home and ride……….

This weekend, we’ll be riding the trees…. We’ll have snow to play on. We’ll catch brookies from our sleds!!! Whoohoo!!!

The temperature in the mountains has been just over 0 C during the day. At night, it’s lower. The Mountainforecast says cold (even calling for some light snow !!!!!). I hope it gets just warm enough to make the snow soft.

This will be the last official ride of the Sled Den this season. The weather is so nice now that most of our friends are playing, golfing or fishing etc…..not to mention the ones that have gone up north back to work!

I hope everyone now realizes that you can ride anywhere in the B.C. of Gaspésie ‘till the end of April. ….Ya, April….. The snow is still good everywhere ‘till mid-April…. After that, it’s just a little thin in areas where the snow was blown. Some places it’s 15 feet at the beginning of April, but it’s more like 10 - 12 feet of snow everywhere. Yep! that's packed snow….not what fell. So when you think of SPRING sledding, think of April in the Gaspésie.

The sledding on logging roads usually starts the first weekend in November through beginning May or so…. This is really good riding above 2000'. The pics don't lie….lol….

Next season, when you consider booking, please book early…’cause the time frame of end March through the month of April will fill fast…..and of course, February is considered prime for certain types of sledding in Gaspésie!

Sled Denners know that I ride with the group and take pics – I don’t guide separately!...and most have been to the Gaspésie before, so they don't need a guide. ...GPS... has seen to that....lol….This is why we are all friends at the Sled Den…..

GPS tracks are shared, so are the fun times and there are always new places to discover, so don’t worry if it’s your first time at the Sled Den or in Gaspésie for that matter!

Most of the pics on Gaspe Snowmobile Adventures are of those of you who have joined our Sled Den Family…..Sled Denners!  So the better you ride, the better the pics !

This weekend will have the last pics of the season……already counting down for the next!