OK – people – here we go with the first official report of the Season….. 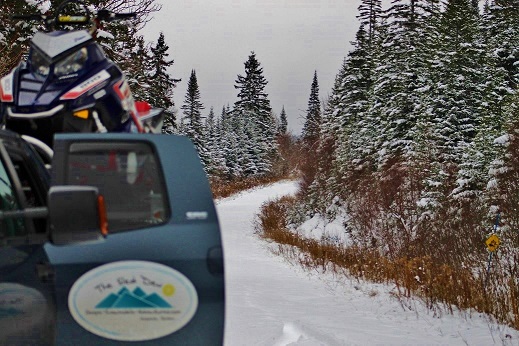 We left The Sled Den and headed to Area X….. There was only 2 - 3 inches on the ground at The Den. As we drove into the backcountry, the snow got deeper…..slowly….

We got 14 kms back and found a foot of snow….whoohoo!

We unloaded the sleds and started to ride up 800 ft. As we rode, you could hear the odd rock tap the runner on the ski. Yep, it sucked….but we’re riding….lol….!

When we reached the top there was a good foot and a half of snow. No more rock tapping at all. Getting excited, we decided to head to 3500 ft right away.

It was more like driving than riding. You know - with your butt cheeks clinched ‘cause you think you going to hit something…..!

3000 ft…..and sure enough, the fog and snow started. The fog got thick enough that we couldn’t see more than 50 feet in front. We decided to look nearer the park where, supposedly, the snow was deeper…….yep, they were right !

The weather is going to warm up a bit so some will melt. But it’s going down to –14 Celsius the next day. The base will go rock hard and when we get a bit of new snow on the top……the riding will be good for all the roads.

I think there will be really good road riding in 2 weeks……maybe earlier, but I would say for sure the last weekend in November. So if you want an early ride but not in the trees or the cuts, then you could be riding before the end of the month if you ride the B.C. of Gaspésie…..

This year is starting off good. Let’s hope the Farmer’s Almanac is right & the snow keeps falling!!!

Reserve soon ‘cause March is BOOKED…... we only have 3 days left that month and the other months are filling up too.